F is for Fish (Seahorses!)

Seahorses are unusual fish – they breathe through gills and have a swim bladder, but they have no scales, instead a bony exoskeleton. They also have a neck and long, flexible, prehensile tail – things that other fish don’t have! This photo taken by Prilfish on Flikr is how most people picture seahorses:

However, seahorses’ bony exoskeletons are held together by fleshy connections, and these can grow into amazing forms to camouflage them – here is a photo by Steve Childs on Flikr, showing a pygmy seahorse camouflaged to fit in with its environment:

Not only can they camouflage themselves in this way, they can also change colour at will, so that wherever they swim they can remain as inconspicuous as possible.

This has to be their best defence from predators – because their swimming style is rather awkward, and they can only reach speeds of 0.01 mph. Mind you – they are rather a bony mouthful, without much flesh, so tend to be eaten by accident rather than design.

Their mating dance is rather glorious and sensual – full of pirouettes and caresses, while they flicker colours and twine tails. The female and male’s territory overlaps and they perform small ritual dances every day for each other.

However reports that the males are monogamous have recently been disputed.

The most amazing thing about seahorses is that they are the only (known) creature on earth where the male gestates and gives birth to the young.

During their courtship, the female deposits her eggs inside a flap on the stomach of the male. He spreads the eggs across the surface of this interior, where he fertilises them, and as they grow they take hold, form placentas, and reach maturity.

Then the male’s stomach contracts in childbirth and expels the babies into the water, where they drift and eat plankton.

Here is another incredible seahorse, a photo taken by Ed Bierman on Flikr, – one that has grown fleshy protuberances like seaweed: 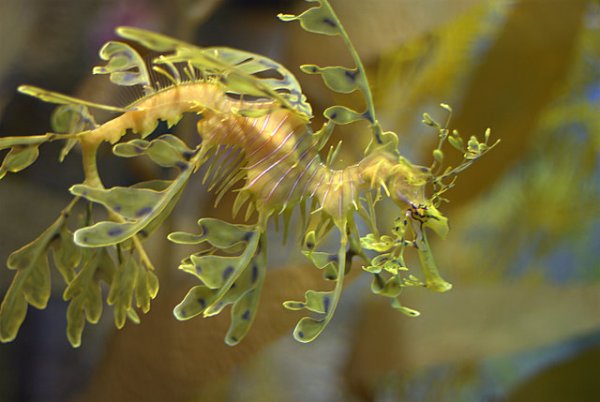 I adore seahorses. I lived by the sea when I was young, and now I look back in horror on the fact that I was given a small, dried seahorse. They used to be in big baskets at the seaside, next to baskets of shells, and the buckets and spades for tourists.

Seahorses are still caught today in some places – they and other marine creatures are laid out in the hot sun to die in agony for people to buy and marvel at their tiny, exquisite forms.

Seahorses are becoming rarer everywhere, and it is possible to help them by making sure shrimp that you buy has been sourced carefully, so as not to damage either the seahorses or their marine habitat.

I have a seahorse poem:

as your spiral tail twines,

in the rising and falling

of your slow ballet,

as your partner passes,

of the waving sea grasses.

If you have time, here is a short video of the pygmy seahorses in the second picture on this blog, and how scientists found out whether they could change their colour if put on another colour sea coral:

You Can Now Buy Signed Books From Me!

National Poetry Day: Choose to be You