My publisher, Peter Mortimer at Iron Press, invited me to read at the ‘eclectic Iron‘ Seaside Festival of Words, Music and Oddities.

The last (IRON AGE) festival, celebrating 30 continuous years of publishing by Iron Press, was called by author David Almond ‘the best blooming festival I’ve ever been to’. So we knew we were in for a treat.

We arrived on the 4 June in Cullercoats, North Shields (very near Newcastle-on-Tyne) and so started the most marvellous working-mini-break ever.

We stayed in the colourful and eclectically eccentric IRON headquarters:

Staying too, poet David Bateman, one of whose haiku was actually written on the wall of the kitchen. Indeed every room in the house is a veritable masterpiece of mural. 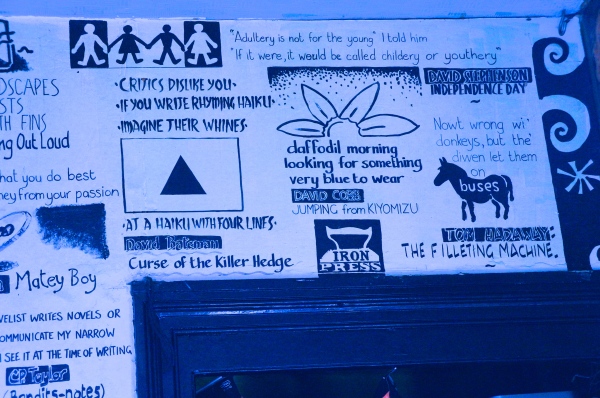 On Thursday evening we were treated to a satirical play, Fracking in Cullercoats, written and directed by Peter Mortimer, and performed by Cullercoats’ Marden High School drama students. It was excellent, very funny, some fabulous acting from the students. This photo is Peter Mortimer introducing the play:

On Friday evening, it was my turn to read from Animal Magic, in what has to be one of, if not the most picturesque venue in the UK – Cullercoats RNLI Lifeboat House, on the sea front, with windows full of sea vistas on 3 sides. This was the view I sat against to read:

What a privilege! And this little filmette is of Peter Mortimer introducing my reading: 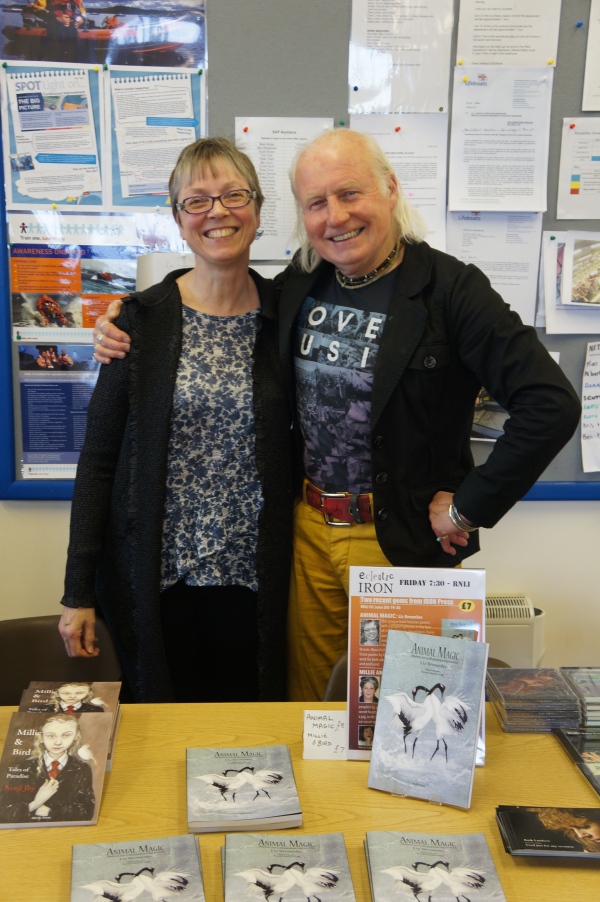 The festival also included a ‘Baiku‘ ride – hosted by excellent haiku poet David Bateman, 20 intrepid poets set off on bikes in sun and gusts of wind to write haiku as they went. This was followed by a haiku workshop to build on their poems.

Other unusual highlights included ‘Writers on a Rock‘ – two of the shortest residencies ever known to be undertaken, 3 hours perched on a rock at low tide, denied all hi-tech gadgets and supplied only with a personalised notebook. One writer was rather taken aback to find out that when she took a ‘comfort break’ it was probably followed by any number of people watching her progress through binoculars…

We watched the ‘Rescue of the Limerick‘, Avril Joy read one of her short stories from Millie and the Bird, and the wonderful Tony Harrison read from his book, Selected Poems.

Then, in the evenings, drinks at the Salt House, listening to the Coast Busters, a selection of excellent local musicians, including Dylan Mortimer, Peter’s son, with friends old and new, followed by long chats into the night round the kitchen table…

What a wonderful experience!

Interview with Joshua Seigal in Books for Keeps

Writing a Moon Poem and Hanging it on a 3D Moon!

Quicky Poetry Ideas for Teachers: Similes – what colour is your heart?