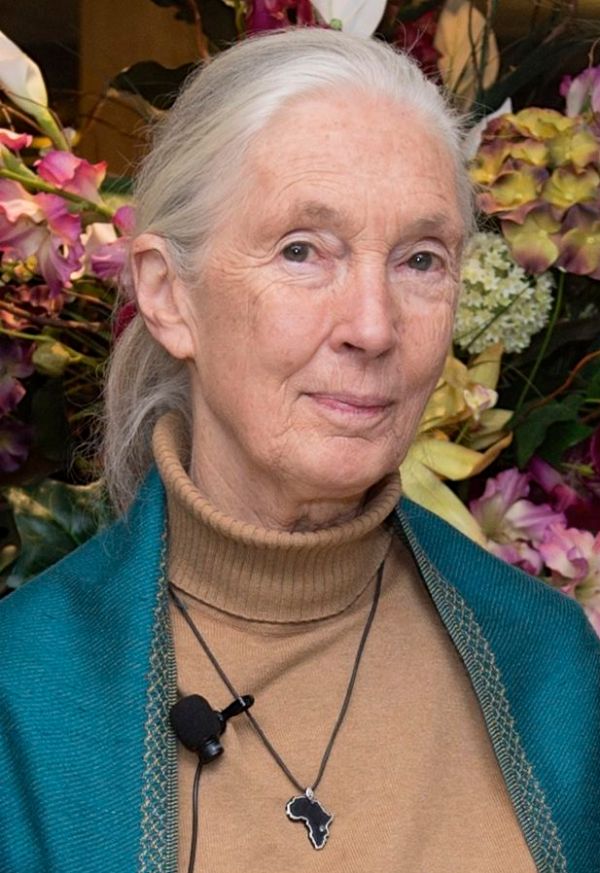 The more we learn of the true nature of nonhuman animals, especially those with complex brains and corresponding complex social behaviour, the more ethical concerns are raised regarding their use in the service of man – whether this be in entertainment, as ‘pets,’ for food, in research laboratories or any of the other uses to which we subject them. This concern is sharpened when the usage in question leads to intense physical or mental suffering – as is so often true with regard to vivisection.”

This quote is from Jane Goodall’s book, Through a Window, written in 1990.

Jane Goodall was born Valerie Jane Morris-Goodall in London, 1934. She was given a stuffed chimpanzee as a child and her love for the toy sparked her interest in animals. (My first toy was a panda – I still have him here on my desk – that and an early visit to Bristol Zoo sparked my interest in animals!)

Her journey to where she became such a passionate scientific observer and advocate for chimpanzees was interesting – she visited the farm of family friends in Tanzania, Africa, and through other friends she met the famous anthropologist Louis Leakey, and became his secretary.

Leakey was particularly interested in chimpanzees, and was looking for someone to do a long-term study on them – he thought Jane fitted the bill. She would need to spend long, patient hours in isolation, gaining their trust, and making meticulous notes.

She did fit the bill. After one false start she started on her defining work at Gombe Stream National Park.

Jane had no training to do scientific work and this meant her methods and observations were governed by a wider interest in just exactly how they behaved – she observed them to have unique and individual personalities, an unconventional and contentious idea at the time.

it isn’t only human beings who have personality, who are capable of rational thought and emotions like joy and sorrow.”

She also observed behaviours such as hugs, kisses, pats on the back, and even tickling and insisted;

these gestures are evidence of “the close, supportive, affectionate bonds that develop between family members and other individuals within a community, which can persist throughout a life span of more than 50 years.”

Her research there is best known to the scientific community for challenging two long-standing beliefs of the day – that only humans could construct and use tools, and that chimpanzees were vegetarians.

She observed chimpanzees using blades of grass, often modified, to stick into termite mounds and gather the insects to eat, rather like they were using a long-handled spoon.

Until this time,  science had distinguished humans from the rest of the animal kingdom as ‘toolmakers’. In response to Jane Goodall’s revolutionary findings, Louis Leakey wrote:

We must now redefine man, redefine tool, or accept chimpanzees as human!”

Her other revolutionary observations were chimps pursuing, killing and eating other monkeys, birds and small deer. Chimps were thought to be vegetarian before her study.

We have since found out that chimps, although possessing the same muscles as us, have them structured slightly differently, and they use fewer neurones to control them – which means they have less motor control but much more power as all the muscle is used. They are at least four times as powerful as us and can pull a man’s arm straight off.

In 1977, she established the Jane Goodall Institute, which supports the Gombe research, and she is a global leader in the effort to protect chimpanzees and their habitats.

Jane Goodall has in the past and continues to promote the need for and encourage African nations to develop nature-friendly tourism, which helps them with a living.

She has written a book for children in 1989 called The Chimpanzee Family Book – it won a prize and she used the prize money to have it translated into Swahili to educate children who live areas near chimpanzees, to foster a pride, interest in and love for the local environment and its wildlife.

Campaigning to get scientists to find alternatives to the use of animals in research has also been part of her unflagging work – although she opposes militant animal rights groups as she believes extremists on both sides of the issue polarise thinking and make constructive dialogue impossible.

She has been the recipient of many awards – culminating in 2002 when he was named a Messenger of Peace by the United Nations and in 2003 being made a Dame of the British Empire.
.
Extraordinary.

National Poetry Day: Choose to be You