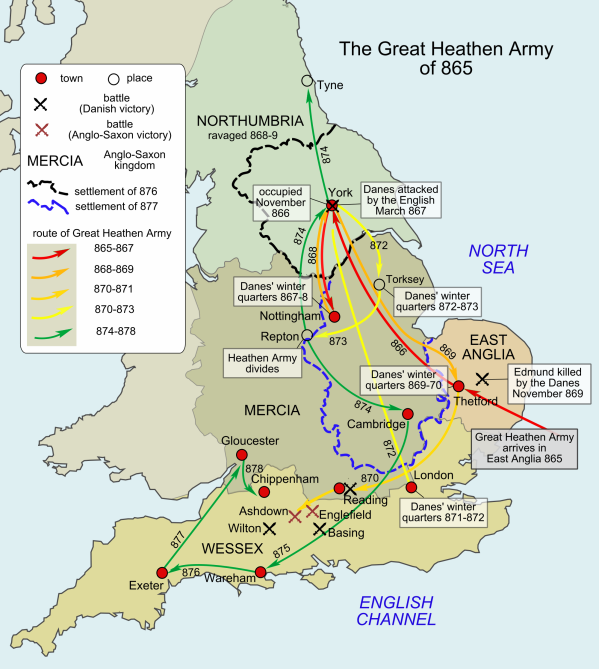 Image by Hel-Hama, by CC licence.

Æthelflæd (pronounced Ethel-fled) was an Anglo-Saxon princess born around 870, the eldest daughter of Alfred the Great, who was the King of the Anglo-Saxon Kingdom of Wessex. In those days there was no overall ruler or Monarch of England. The map above shows Wessex as it was being claimed back from the Vikings.

The Vikings has invaded from Denmark and held a fair portion of southern England – in 1877 they took over Mercia, throwing out the King of that region, Burgred. They then halved Mercia and ruled the east themselves and they appointed a King Ceolwulf to rule the west with their support.

Æthelflæd was well-educated, and as she grew up, while her father Alfred the Great was at war with the Danish Vikings, taking back huge parts of captured territory, she witnessed a lot of military action. In her teenage years she saw Alfred claim back parts of captured Wessex and parts of Mercia.

In 882, Æthelred (pronounced Ethel-red, rather a similar name to Æthelflæd!) became King of the west of Mercia after Ceolwulf, and it is thought that he asked Alfred to help him regain the rest of his territory.

Alfred agreed to help, and managed to win back London from the Vikings and Æthelred acknowledged Wessex as the dominant power over Mercia.

It is not known exactly when, but Æthelflæd at some point married Æthelred, even though he was much older than her. This may have been when Alfred won London back or afterwards – what is sure is that it was a tactical move on both Alfred and Æthelred’s part, strengthening ties and making strong army allegiances.

Æthelflæd and Æthelred proved to be a good team – they fought over the years to regain more of Mercia, and it is thought that Æthelflæd helped by suggesting tactics and carrying them out – such as fortifying borders after they had been regained. Among the towns where she built defences were Bridgnorth, Tamworth, Stafford, Warwick, Chirbury and Runcorn.

Æthelred was quite sick and elderly, and in 911 he died – leaving Æthelflæd the ruler of Mercia as it now stood, with the title Lady of Mercia. This was a unique position, Wessex did not recognise female rulers, and she was the only known case of a female ruler in Anglo-Saxon history.

She continued to fight the Vikings using her considerable tactical expertise along with her brother Edward, as they both believed the same as their father – in a united England. They came some way towards that goal.

Æthelflæd was a heroine in her own time, and thereafter. In the twelfth century, Henry of Huntingdon paid her a rather touching tribute in this poem, saying she was as good as a man:

A man in valour, woman though in name:

Conqu’ror o’er both, though born by sex a maid.

Chang’d be thy name, such honour triumphs bring.

A queen by title, but in deeds a king.

Heroes before the Mercian heroine quail’d:

Caesar himself to win such glory fail’d.