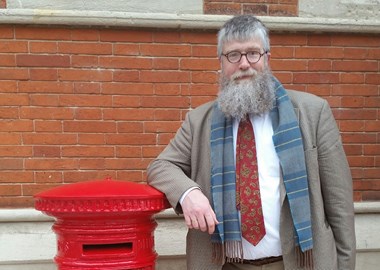 Best known as an author of children’s prose (and for his beard), Philip Ardagh also writes poetry for all ages; his poems appearing in a variety of anthologies. These include Green Glass Beads, collected by Jacqueline Wilson, Read Me and Laugh, collected by Gaby Morgan, A Million Brilliant Poems (part one), collected by Roger Stevens, and Puppy Poems  collected by Gaby Morgan. This is Philip on Tumblr and on Twitter. I know Philip as a very, very funny man – this poem doesn’t reflect that, but it is one of my favourites of his:

I bury my face in your fur,

You smell of sunshine

And golden days of play.

You manage to lift your head

And look at me with trusting

I recall your puppy days

And all we’ve shared together since.

The secrets that I’ve told you,

A part of me forever.

Kind hands lift you from me.

I will be with you until the end, boy.

I’m right here at your side.

And afterwards? You will live

the happiest wet-nosed memory of all.

But first the pain.

You thump your tail on the

To turn back time.

Moira Andrew was born and educated in Scotland, became a primary teacher, worked her way up to Assistant Head, then lectured in education at Craigie College of Education, Ayr before moving to Bristol where she was Head Teacher of a primary school. During the 80s, 90s and into the 2000s she wrote stories and poetry for children. Here most recent poetry collection is Wish a Wish, illustrated by Anna Popescu, Poetry Space, 2016, available here. Moira’s website is here.

This is one of Moira’s gorgeous poems:

Portrait of a Dragon

If I were an artist

To do a proper job

For his back I’d

For spikes I’d use

His tail would be

For his head, the

And his eyes would

But I’d keep the best

till last.  For his

I’d use all reds and 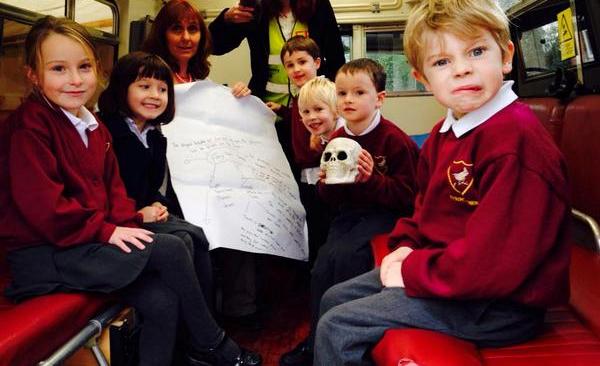 Deborah Alma is the Emergency Poet in her vintage ambulance which she takes to schools and libraries and festivals. She has edited three adult poetry books and written her own collection of poems too. She lives with her partner the poet James Sheard on a hillside in Powys, Wales with a cat called Little My and a sheepdog called Daisy. Her website is here.

Here is one of Deborah’s poems, written in response to the picture shown:

The Spirit of the House

from the painting by August Macke 1910

A smug cat, a cosy cat, a passing cat,

a blue striped jug, with the light catching

the glaze, its dazzle closes the eyes

A scented geranium, red and jaunty

in a terracotta pot.

to hold the finger rubs of friends around its rim

always, always when they come, they reach out

to stroke the leaves, to rub the dish,

to add to the stroked smug of the cat,

to peel an orange.

There they are my friends, their backs

to the wall as they bend and bow

to half heard music, from the times we danced

to the times we laughed.

A smug cat, a cosy cat, a passing cat.

Adisa was born with a silver tongue and a head full of rhymes. He exploded onto the spoken word scene in 1993. His mango flavoured metaphors and his larva-fuelled performances soon became legendary on the London performance poetry circuit. One year after taking his showon the road, Adisa landed first place in a National competition titled New Performance Poet of the Year. Benjamin Zephaniah, who was one of the judges said: Adisa is the future. It’s so good to have something to look forward to. Adisa’s really amazing website with contact info is here.

Here is one of his fabulous poems:

London is no longer naked

The world unites on one doorstep

Now the masquerade can begin

All speaking the same tongue

To the godfarther the African drum

A sea of hands holds the heavens aloft

As if offering the creator a prayer

The rhythm is so moving, even the statues shed a tear

Sound bites have no place in this parliament

The government has come to the streets

In this global democracy

The people vote with their feet

Some bring red, some bring yellow

Then fly their flags to salute the day

The young find wisdom in an elders face

The old remember the joys of play

And above the music

We hang our dreams on the shoulders of hope

And harmonizing on the same note

I am the world